Hydrangeas have been a southern landscape staple for generations. With their beautiful iconic blooms and a wide assortment of shapes and colors, they have been a long-time favorite from zone 5 to 9. Some varieties are seen as far north as zone 3. 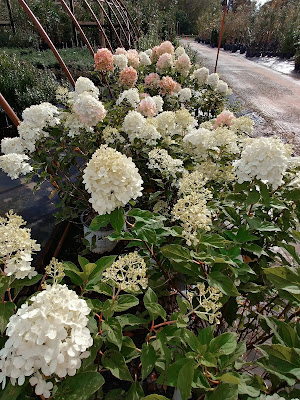 If you are like so many proud hydrangea owners, you spend your fall and winter wondering what to do with the leftover stalks. Should you cut them back? Should you leave them standing? Well, I would love to tell you the answer is the same across the board. However, it is not. What you do with the barren wood truly depends on the type of hydrangea you have. So the first step to answering this age-old question is to identify your hydrangea. 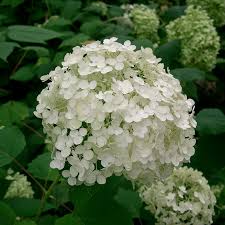 Also known as wild hydrangeas, they are native to the United States. It is a large shrub, growing up to 6 feet tall. Most people will plant this as a hedge plant. Its scientific name, Hydrangea arborescens, comes from the word "arbor" meaning tree, because of its branching habits and size. Their bloom time is between June and September. Their blooms are typically white, with a round shape, and smaller than the big leaf varieties, which we will delve into next.
"Annabelle" is the most common of the smooth hydrangeas. Its blooms look like large snowballs and can grow to be twelve inches in diameter.
These beauties should be pruned back in the late winter or early spring. They will bloom on new wood, meaning, the current season's growth. Pruning them at this time encourages new growth and will result in a fuller and stronger plant, so that flopping does not become a problem. 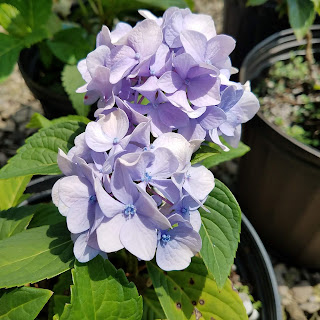 
Here are two of the most common big leaf hydrangea 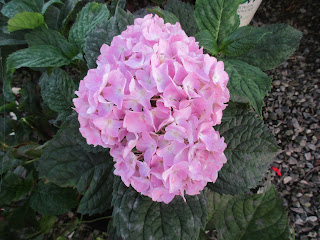 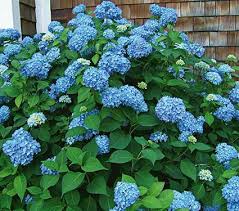 These are the most recognizable and popular hydrangeas because of their large flower head and their vibrant colors of blue, pink, and purple. This type of hydrangea is hardy in zone 7, but may not survive the freezing temperatures in zones 6 or above. However, they can be sensitive to the heat as well, so they seem to thrive in areas of partial shade. Some of them only bloom on the previous season's growth and other newer ones bloom on the previous seasons growth and new growth and are called rebloomers. 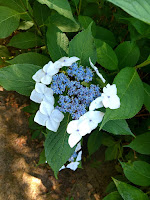 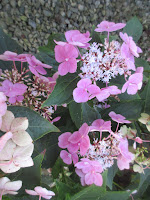 These are very similar to the mophead variety, with the main difference being in the flower itself. They have tiny fertile flower buds in the center with flowers that circle the edge of the flower. These flowers are sterile and their only purpose is to attract pollinators to the fertile buds. Like the mophead, they thrive in partial shade. 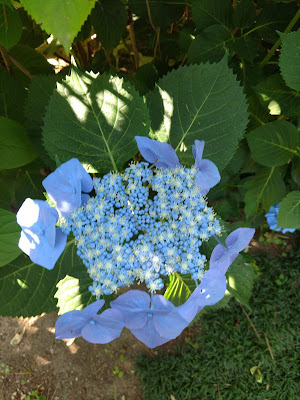 These are the least common of the hydrangeas. While they are classified by many as a big leaf hydrangea, they are not a true big leaf hydrangea. they have a classification all their own. Hydrangea Serrata It looks very similar to the lacecap but has much smaller flowers and leaves. These are hardy in zone 5, making them a better choice for areas prone to late winter cold snaps. The TUFF STUFF series not only offers cold hardiness, but it has added reblooming to its beauty.

The mountain hydrangea is native to the mountainous areas of Asia and Japan where they are exposed to harsher conditions. Therefore, they are one of the hardier varieties and a solid choice if you live in an area where the winters are a little rough. 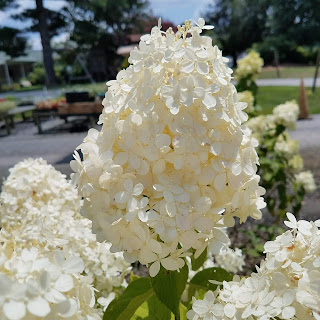 Panicle hydrangea has elongated flower heads. The cone-shaped panicles can range from six to eighteen inches long. Of all the hydrangea varieties the panicle hydrangeas are the coldest hardy and thrive in zones 4 to 7. They are one of the few that can thrive in full sun. They usually flower from mid to late summer and their blooms are very long-lasting. These blooms are a great choice for drying or to use in cut arrangements.
It is best to prune these hydrangeas back to 1 to 3 feet tall, though you can cut them to the ground. If you leave a bit of the old wood, it can help to support the new growth and keep it from flopping as much. This should be done in late winter to early spring. 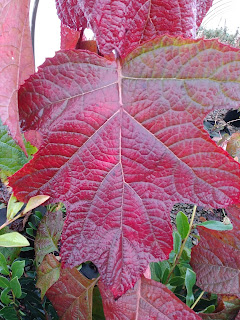 This hydrangea gets its name for obvious reasons, as its foliage is shaped like an oak leaf. Its scientific name, Hydrangea quercifolia,  literally translates to hydrangea oakleaf. Not only do the leaves bear resemblance to the oak tree, but they also change color in the fall, making it one of the most attractive choices for your landscape. The oakleaf hydrangea is one of the few hydrangeas that are native to the United States. It has white cone-shaped flower heads that turn to a beautiful shade of pink into the fall.
These hydrangeas only require a light trim if anything,  in the late fall or early winter after the flowers are gone but before new buds set. If you trim too late you risk cutting off blooms for the next growing season, as they begin to set blooms for the next bloom cycle almost as soon as the current bloom cycle ends. 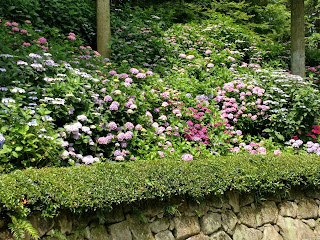 This hydrangea is exactly as the name suggests. It is a vine. It is a very slow grower and may take a long time to see it to its full potential. It has flowers that resemble those of the lacecap hydrangea and they are fragrant. Their blooms usually appear in mid to late summer. This variety prefers full to partial sun but will not tolerate full shade. This vine only needs a light trimming in the late summer or early fall when it has finished blooming.  You may trim at leaf nodes to encourage the vine to fill out. or make cuts to remove dead or damaged branches. 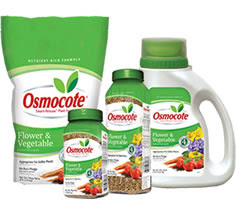 It is best to fertilize with organic matter but if you need to apply chemical fertilizer Osmocote is a great choice.
If you are trying to improve the color of your hydrangea you may add aluminum sulfate, composted oak leaves, pine needles or coffee grounds to alkaline soil to get bluer blooms. To encourage pink blooms in acidic soil, add wood ashes or lime to the soil. March through July are the best times to fertilize your hydrangeas, but only do so lightly, as too much or too often can scorch your plants.

Below are some tools that we hope you will find helpful. 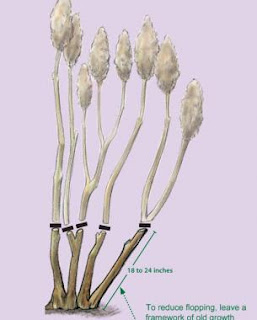 Go to the Proven Winner link for more information on Hydrangea care : 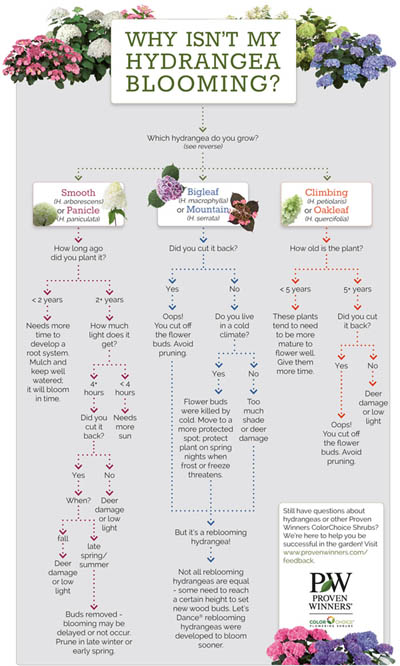 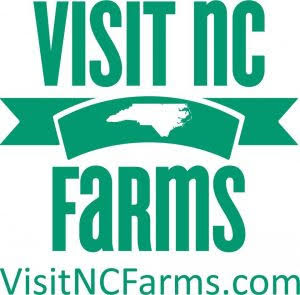 Posted by Mitchell's Nursery at 10:58 AM

Thanks for this article, it was very timely and helpful. I really like your new approach to marketing through this email newsletter. See you at the nursery.

Thank You. We are always open to suggestions and ideas to improve.

I love your new format.
I now know I need Panicle Hydrangea for our new garden. We are looking forward to our next bext visit.
Any suggestions for full sun, evergreen, flowering, fruit bearing, bushes that attract birds and butterflies?

Well to answer your question as well as we can, Evergreen and flowering for full sun: Encore azalea; Viburnum; Magnolia are just a few and fruit bearing choices are numerous, blueberry, apple, nectarine, plum, cherry, peach, blackberry are just a few of the more notable choices. Birds are attracted to berries and nectar plants as food sources as the nectar plants attract insects. Birds also love all trees for nesting and perching but seem to prefer deciduous trees for their filtered light. Butterflies are attracted to nectar plants. Butterfly bushes are a great choice but Milk weed attracts monarchs who's numbers have dwindled greatly in the past years. Keep in mind how important pollinators of all sorts are when you make your planting choices and even other insects as birds search for varied food sources. Humming Birds are attracted to nectar plants as well. Bright colored flowers are the biggest initial attractant that bring in the hummingbirds.