The Return of the Impatien

Impatiens, grown from seed, have been a favorite for shade beds and understory beds. However, in the past few years, they have been hard to find due to their lack of resistance to Downy Mildew. Large numbers of impatiens were lost by growers everywhere. It became such a problem that for many years they just were not suitable to be grown for bedding plants. Mitchell's quit growing them for years and did not recommend planting them. 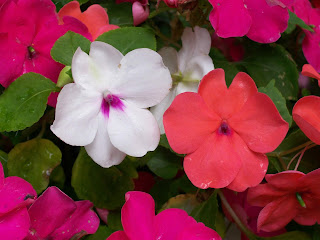 Photo/ oldfarmersalmanac.com
Downy Mildew is caused by the fungus-like water mold Plasmopara abducens. Say that three times, fast. It can be introduced to your soil by infected plants or by airborne spores called sporangia. Once it gets into the garden, it can be spread by wind or even rain splashing. Cool, wet, humid weather creates perfect conditions for the mildew to thrive. Downy mildew can potentially overwinter in the garden by specialized spores called oospores. These spores are usually left behind in infected plant debris.

Symptoms of Downy Mildew often begin at the tips of leaves and include yellowing of the leaves. The affected leaves often curl downward. As the disease progresses the leaves will often dry and drop off. The most obvious sign of the disease is the presence of a fuzzy white material on the stems and often on the undersides of the leaves. This is actually the organism responsible for the disease. 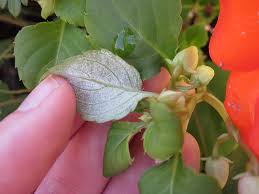 Photo/ arboretumfriends.org
Plants infected by the Downy Mildew are unlikely to recover from being infected. These plants should be removed from your garden, roots and all. DO NOT compost these plants as this disease will then be spread wherever you use the composted material.

Now, for the good news. Impatiens are making a comeback! Through breeding, new varieties are coming to the forefront that have proven to have a higher disease resistance than those of the past. So, we could see those beautiful impatiens beds adorning yards everywhere once again.

Many people turned to the New Guinea impatiens when they were unable to find their favorites. These are naturally disease resistant but aesthetically speaking, they do not quite offer the mounds of blooms that are so sought after in the world of impatiens.

We hope you are able to find your favorites here at the nursery this spring. Come on out and take a look at our Beacon Impatiens. We trialed them last year and have found them to be fantastic in the shade.